The work of people in a civil emergency is sometimes described as people doing their ordinary job in extraordinary circumstances. That seems rather apt as well for the work done by volunteers in the Good Neighbours Network last year, as we continued under the experience of covid and covid restrictions. This meant, for instance, that many social activities never restarted, those that did, did so in smaller or different ways. And we can see all this coming though in the total tasks.

In 2021, our groups reported a total of 117,978 tasks but the pattern of those tasks was such that social activities, coffee mornings, minibus trips etc fell by 90% (about 38,000 tasks in 2020 but that itself was still down due to Covid on 2019). Many of those activities will come back when it is safe to do so and circumstances allow but there will also be a longer build up period due to the mental health impacts. It is clear that there has been a significant increase in some people’s frailty, and some have lost their self-confidence. Good Neighbours groups are well-placed to connect with these people and being very local find ways that work for them to re-engage with others safely.

Health related transport also fell although only by about 40%. That reflects the fact that GPs were seeing many fewer patients in person and many consultations, even some hospital consultations were being conducted on the telephone or on-line. There were also fewer routine operations as hospitals coped with an influx of patients with Covid at various times.

Befriending tasks were actually up by 22% and some though not all of that increase was in telephone befriending as people spent more time at home, and were more at risk of isolation.

Some volunteers were themselves vulnerable or shielding and unable to help for part of the period. There were others who worked extraordinarily hard to look after people doing things like delivering their shopping or prescriptions. Many groups carried on working throughout the period and in one case, a particularly enterprising group with good social media connections managed to recruit 150 new volunteers. Another one recruited 60. It shows what can be done in some places. Whatever any individual group has done, I would like to pay tribute to the immense task that all the volunteers have undertaken over the last year and in particularly challenging circumstances. Without them, none of this would have happened.

The Network itself has been continuing throughout and the staff have worked extremely hard, partly from home at times, keeping on top of all the advice streaming out of government on Covid on a daily basis and working out what to pass on to groups in what has now become a weekly email. We have moved from meeting in resources cafés and groups to meeting on-line although we hope in the long term to have a more mixed-mode approach. I want to thank Karen Jordan and Nicky Dodd particularly for all they did in 2021 to keep things going and doing such a fantastic job. Towards the end of the year, we were sad to say farewell to Nicky as she moved to a new role, and we look forward to welcoming her replacement in 2022.

The Strategic Liaison Group also changed this year as Cllr Anna McNair-Scott, and Cllr Roger Huxstep, stepped down as county councillors in the May elections and we are particularly grateful to both of them for the significant support and wise advice they have given over several years. In the summer, we welcomed Cllr Sarah Pankhurst and Cllr Steven Broomfield who replaced them on the Liaison Group.

Funding for the Good Neighbours Network comes from Hampshire County Council’s (HCC) Adults Health and Care department, and the NHS Commissioners in Hampshire. The County is currently consulting on ending all Adults Health and Care grants due its budgetary constraints and we are contributing to that while looking at alternative approaches for the longer term future. There is no doubt that GNN groups have contributed hugely to looking after people during Covid, and that has been recognised and appreciated by HCC and Health Commissioners but their own funding has also come under significant challenges at the same time. There are no easy or straightforward answers to this and we welcome all thoughts, and ideas for addressing it although we have been prepared for this for some time and undertook some feasibility work in 2021 about broadening the network which was extremely helpful and will be implemented in 2022.

2021 has been another year of change, restrictions and hope.
The Covid vaccinations have been a remarkable salve for most of us and the NHS are as always heaven sent. Change though is a part of life and 2021 brought us face-to- face with a bucketful.

GNN has had to say goodbye to Nicky Dodds and I am sure all GN volunteers who have had the pleasure of working with her will join us in wishing her a fond farewell and the best of everything for the future.

Good Neighbours groups have also had to continue to undergo change. The on-going Covid restrictions meant that the all-important face-to-face lunch, coffee and other social clubs have had to reduce capacity or suspend activity and medical trips were significantly affected, which resulted in a lower numbers of tasks completed than in years unaffected by Covid.
However, the Network is not just about the numbers, it is about people helping people and Good Neighbours groups adapted their offer to include new activities, such as delivering Christmas hampers and creating fabulous window boxes for clients and within each local community many groups played a significant role in the vaccination programme, averaging around 50 vaccination trips a week.
Overall 117,978 acts of kindness were completed over the year.

The 2021 statistics highlight that Good Neighbours groups have continued to inspire and show resilience throughout this period of instability and restriction and I am humbled by such extraordinary energy, bravery and sheer force of spirit each volunteer offers.

I would like to share this quote from a Good Neighbours client – for me it simply captures the ethos behind the GNN.

‘I am so glad that there are still kind such people in this world willing to help others.’

‘Oh what a Year’ – The year started with a new UK lockdown, storming of the US capitol, a new US president, a new Suez crisis. Next, The Euros ( where England nearly faced glory ), Black Lives Matter, Prince Phillip died at the grand old age of 99, and we were all touched by the striking image of the Queen all alone, grieving at his funeral as she adhered to Covid restrictions. Then, Freedom Day, closely followed by a ‘pingdemic.’ August 31st saw the last troops leave Afghanistan after a 20 year conflict. September bought us The 32nd Olympic Games, held in Tokyo with no spectators, and where Team GB secured 65 medals. Autumn we welcomed James Bond back to the cinema and the eagerly awaited Cop 26 to Glasgow. Winter bought us new Covid variants, 39 million boosters, back to Plan B and more government sleaze than you can shake a stick at!

For Good Neighbours groups, ‘Oh what a Year’

World Kindness Day and Carers Rights Day fell in November with groups embracing opportunities to promote what they offer to their local community. There were a selection of stalls at Wellbeing events, quizzes and tea parties. 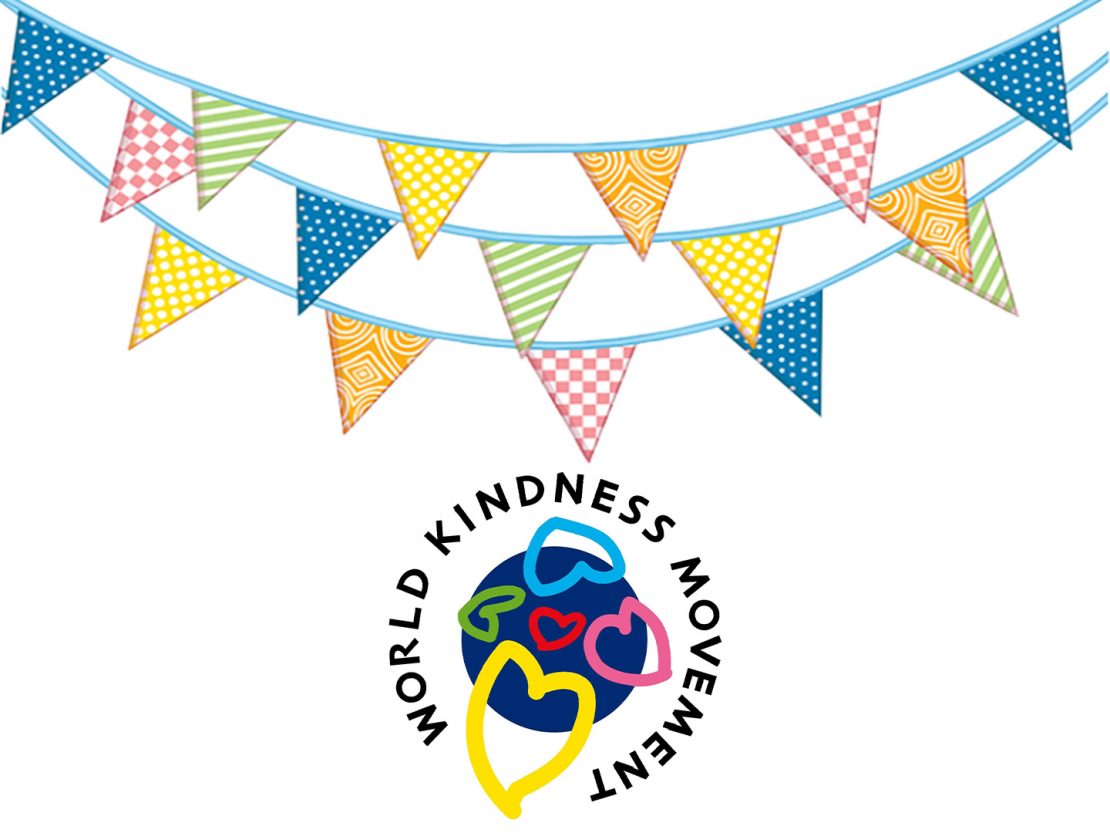 As GNN turns 45 , we acknowledge the amazing contribution from all GNN volunteers over the years who have helped deliver over 2,000,000 ACTS OF KINDNESS. 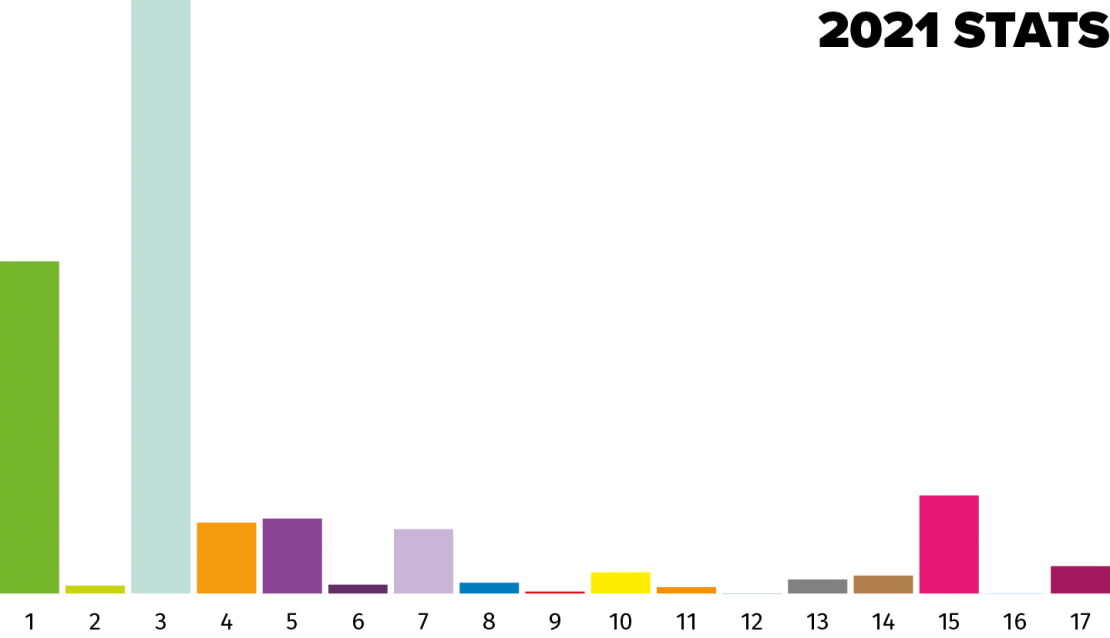 The information we receive from each of the groups every year, has always enabled us to track activity, provide impact reports and evidence value to funders.

Covid has undeniably impacted on our lives and activities in a way that back in 2019 would have seemed like something out of a sc-fi novel – so we can effectively track activity within the Network and develop a worthwhile overview we have included three years of groups statistics alongside each other.

The comparison on the figures from 2019 -pre-Covid, 2020 – Covid impacted and the brutal lockdowns, 2021- where tiers and plans B and B+, alongside the vaccination programs were implemented, highlights the shift in the type of activity that has been accessed. The more traditional hospital driving tasks (historically one of the highest recorded activities) has shifted in emphasis to one of delivery services (prescriptions and food), with sharp peaks recorded in befriending and face to face social activity once restrictions have eased.

The data driven pivot has helped us develop a useful operational model for the network over the last 24 months and will help shape plans, actions and developments in 2022.

As we approach funders for long term sustainability, the messaging will be very much around the critical role that good neighbours have provided, through safe and effective practice, when social and health care were stretched to breaking.

Without the safety net and vital touch point that the GNN provides, many more people would have faced isolation or difficulty.

Some new GNN activities launched in 2021. 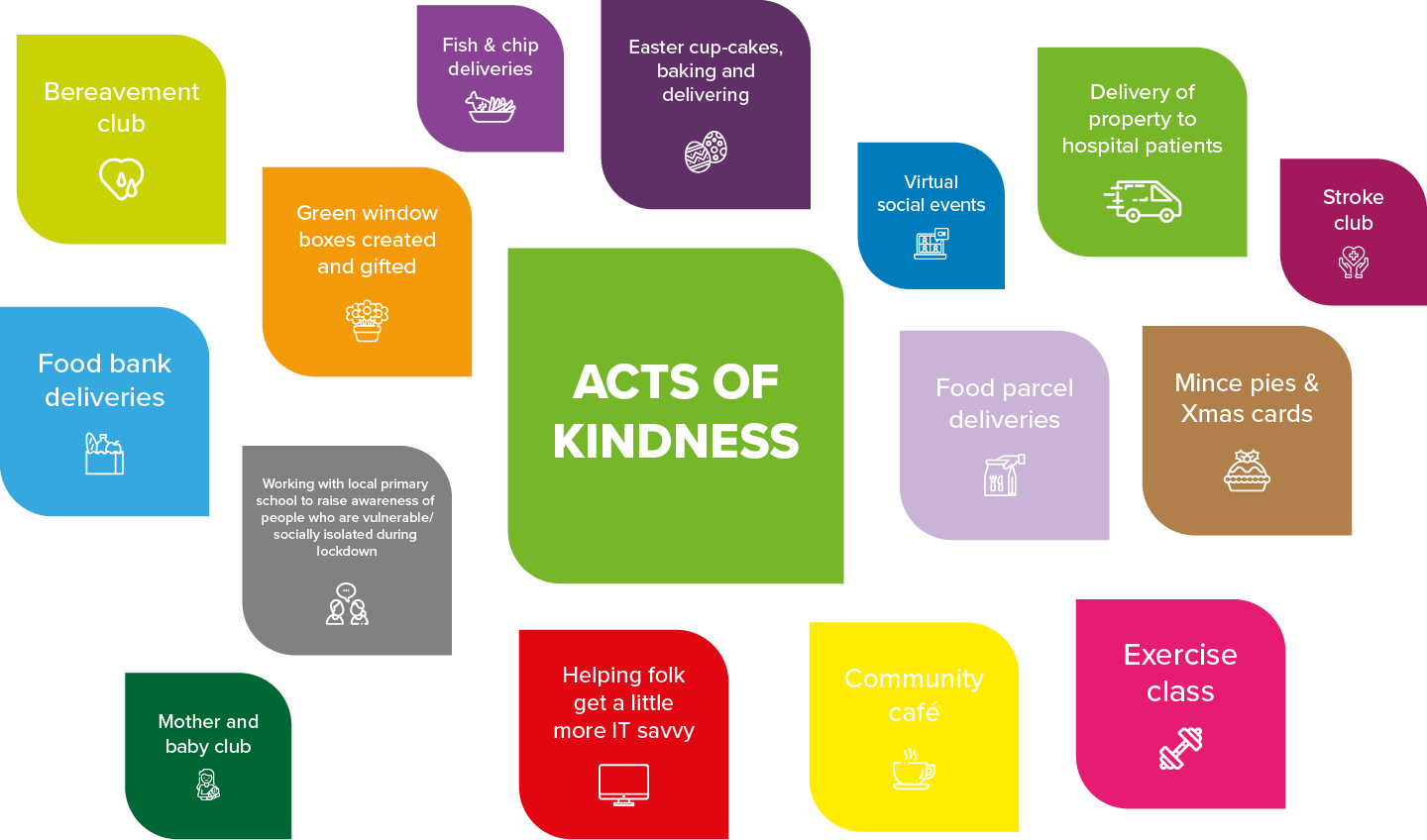 ‘On Tuesday 21/9/2021 we held our first client gathering since Covid, we invited all our clients to join us for tea and a chatter from 12.30pm – 4pm, almost 60 people arrived to enjoy warm sausage rolls and copious cups of tea. We had considered entertainment, however decided to just have soft music in the background and let the typical day-to-day chatter fill the room with joy. There tears of joy with clients meeting up again, tears at seeing our volunteers – The market hall vibrated with life and gratefulness at being able to demolish scones, jam & cream , plates of finger sandwiches, followed by the much love French fancies, Oh! And more tea.’

From a lady who has had to shield:
‘What a wonderful service my shopper has provided. Deliveries always arrive with a smile. I’m looking forward to meeting her properly over a cup of tea when this is all over.’

‘We have one client who is very disabled with arthritis etc and who has breathing difficulties. Before lockdown she attended Keep fit sessions at a local leisure centre which we agreed we could take her to. When lock down occurred and she could no longer attend, her condition noticeably deteriorated. She is now back going to the centre and we take her up to three times a week, where she attends organised classes and also sessions when she works on her own. She remarked a couple of weeks ago that she had managed 15 minutes on the treadmill, which for her, is a great achievement. She is very grateful to us for our help’.

One of our clients celebrated her 100th birthday in August. During lockdowns she was visited on a regular basis, despite the volunteers not being able to enter her flat. Conversations conducted from outside to first floor window.

‘As a group we play, we talk through WhatsApp all day everyday, we play songs to suit the mood, I play them Simply the Best, they come back with their musical replies.’

‘We needed to come to terms with online conferencing and had to learn quickly on the job. Most of the committee and Trustees are in their 70s, so this was a major feat too. We managed because we all believe in what we are doing and we help each other.’

IN 2021, GNN SAFELY DELIVERED THE EQUIVALENT OF 324 ACTS OF KINDNESS EVERY SINGLE DAY